When global marketing managers explore how to expand, they start by looking at the world. Knowing the major markets and the stage of development for each allows managers to determine how best to enter and expand. The manager’s goal is to hone in on a new country—hopefully, before their competitors and usually before the popular media does. China and India were expanding rapidly for several years before the financial press, such as the Wall Street Journal, elevated them to their current hot status.

It’s common to find people interested in doing business with a country simply because they’ve read that it’s the new “hot” economy. They may know little or nothing about the market or country—its history, evolution of thought, people, or how interactions are generally managed in a business or social context. Historically, many companies have only looked at new global markets once potential customers or partners have approached them. However, trade barriers are falling, and new opportunities are fast emerging in markets of the Middle East and Africa—further flattening the world for global firms. Companies are increasingly identifying these and other global markets for their products and services and incorporating them into their long-term growth strategies.

China versus India: Who Will Win??

India and China are among the world’s fastest-growing economies, contributing nearly 30 percent to global economic growth. Both China and India are not emerging economies—they’re actually “re-emerging,” having spent centuries at the center of trade throughout history: “These two Asian giants, which until 1800 used to make up half the world economy, are not, like Japan and Germany, mere nation states. In terms of size and population, each is a continent—and for all the glittering growth rates, a poor one.”1

Both India and China are in fierce competition with each other as well as in their quest to catch up with the major economies in the developed world. Each have particular strengths and competitive advantages that have allowed each of them to weather the recent global financial crisis better than most countries. China’s growth has been mainly investment and export driven, focusing on low-cost manufacturing, with domestic consumption as low as 36 percent of gross domestic product (GDP). On the other hand, India’s growth has been derived mostly from a strong services sector and buoyant domestic consumption. India is also much less dependent on trade than China, relying on external trade for about 20 percent of its GDP versus 56 percent for China. The Chinese economy has doubled every eight years for the last three decades—the fastest rate for a major economy in recorded history. By 2011, China is the world’s second largest economy in the world behind the United States.2 A recent report by PricewaterhouseCoopers forecasts that China could overtake the US economy as early as 2020.3

China is also the first country in the world to have met the poverty-reduction target set in the UN Millennium Development Goals and has had remarkable success in lifting more than 400 million people out of poverty. This contrasts sharply with India, where 456 million people (i.e., 42 percent of the population) still live below the poverty line, as defined by the World Bank at $1.25 a day.4

China has made greater strides in improving the conditions for its people, as measured by the HDI. All of this contributes to the local business conditions by both developing the skill sets of the workforce as well as expanding the number of middle-class consumers and their disposable incomes.

India has emerged as the fourth-largest market in the world when its GDP is measured on the scale of purchasing power parity. Both economies are increasing their share of world GDP, attracting high levels of foreign investment, and are recovering faster from the global crisis than developed countries. “Each country has achieved this with distinctly different approaches—India with a ‘grow first, build later’ approach versus a ‘top-down, supply driven’ strategy in China.”5

The Chinese economy historically outpaces India’s by just about every measure. China’s fast-acting government implements new policies with blinding speed, making India’s fractured political system appear sluggish and chaotic. Beijing’s shiny new airport and wide freeways are models of modern development, contrasting sharply with the sagging infrastructure of New Delhi and Mumbai. And as the global economy emerges from the Great Recession, India once again seems to be playing second fiddle. Pundits around the world laud China’s leadership for its well-devised economic policies during the crisis, which were so effective in restarting economic growth that they helped lift the entire Asian region out of the downturn.6

As recently as the early 1990s, India was as rich, in terms of national income per head. China then hurtled so far ahead that it seemed India could never catch up. But India’s long-term prospects now look stronger. While China is about to see its working-age population shrink, India is enjoying the sort of bulge in manpower which brought sustained booms elsewhere in Asia. It is no longer inconceivable that its growth could outpace China’s for a considerable time. It has the advantage of democracy—at least as a pressure valve for discontent. And India’s army is, in numbers, second only to China’s and America’s…And because India does not threaten the West, it has powerful friends both on its own merits and as a counterweight to China.7

Since 1978, China’s economic growth and reform have dramatically improved the lives of hundreds of millions of Chinese, increased social mobility. The Chinese leadership has reduced the role of ideology in economic policy by adopting a more pragmatic perspective on many political and socioeconomic problems. China’s ongoing economic transformation has had a profound impact not only on China but on the world. The market-oriented reforms China has implemented over the past two decades have unleashed individual initiative and entrepreneurship. The result has been the largest reduction of poverty and one of the fastest increases in income levels ever seen.

China used to be the third-largest economy in the world but has overtaken Japan to become the second-largest in August 2010. It has sustained average economic growth of over 9.5 percent for the past 26 years. In 2009 its $4.814 trillion economy was about one-third the size of the United States economy.9 China leapfrogged over Japan and became the world’s number two economy in the second quarter of 2010, as receding global growth sapped momentum and stunted a shaky recovery.

India’s economic liberalization in 1991 opened gates to businesses worldwide. In the mid- to late 1980s, Rajiv Gandhi’s government eased restrictions on capacity expansion, removed price controls, and reduced corporate taxes. While his government viewed liberalizing the economy as a positive step, political pressures slowed the implementation of policies. The early reforms increased the rate of growth but also led to high fiscal deficits and a worsening current account. India’s major trading partner then, the Soviet Union, collapsed. In addition, the first Gulf War in 1991 caused oil prices to increase, which in turn led to a major balance-of-payments crisis for India. To be able to cope with these problems, the newly elected Prime Minister Narasimha Rao along with Finance Minister Manmohan Singh initiated a widespread economic liberalization in 1991 that is widely credited with what has led to the Indian economic engine of today. Focusing on the barriers for private sector investment and growth, the reforms enabled faster approvals and began to dismantle the License Raj, a term dating back to India’s colonial historical administrative legacy from the British and referring to a complex system of regulations governing Indian businesses.10

Since 1990, India has been emerging as one of the wealthiest economies in the developing world. Its economic progress has been accompanied by increases in life expectancy, literacy rates, and food security. Goldman Sachs predicts that India’s GDP in current prices will overtake France and Italy by 2020; Germany, the United Kingdom, and Russia by 2025; and Japan by 2035 to become the third-largest economy of the world after the United States and China. India was cruising at 9.4 percent growth rate until the financial crisis of 2008–9, which affected countries the world over.11 Both India and China have several strengths and weaknesses that contribute to the competitive battleground between them.

Infosys is one of India’s new wave of world-class IT companies. 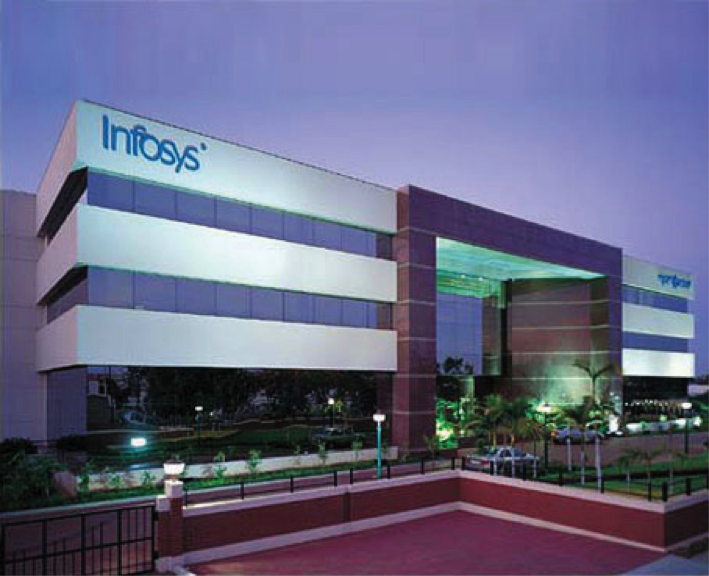 China is in much better shape than India is. While India has barely paid attention to its urban transformation, China has developed a set of internally consistent practices across every element of the urbanization operating model: funding, governance, planning, sectorial policies, and shape. India has underinvested in its cities; China has invested ahead of demand and given its cities the freedom to raise substantial investment resources by monetizing land assets and retaining a 25 percent share of value-added taxes. While India spends $17 per capita in capital investments in urban infrastructure annually, China spends $116. Indian cities have devolved little real power and accountability to its cities; but China’s major cities enjoy the same status as provinces and have powerful and empowered political appointees as mayors. While India’s urban planning system has failed to address competing demands for space, China has a mature urban planning regime that emphasizes the systematic development of run-down areas consistent with long-range plans for land use, housing, and transportation.16

Despite the urbanization challenges, India is likely to benefit in the future from its younger demographics: “By 2025, nearly 28 percent of China’s population will be aged 55 or older compared with only 16 percent in India.”17 The trend toward urbanization is evident in both countries. By 2025, 64 percent of China’s population will be living in urban areas, and 37 percent of India’s people will be living in cities.18 This historically unique trend offers global businesses exciting markets.

So what markets are likely to benefit the most from these trends? In India, by 2025, the largest markets will be transportation and communication, food, and health care followed by housing and utilities, recreation, and education. Even India’s slower-growing spending categories will represent significant opportunities for businesses because these markets will still be growing rapidly in comparison with their counterparts in other parts of the world. In China’s cities today, the fastest-growing categories are likely to be transportation and communication, housing and utilities, personal products, health care, and recreation and education. In addition, in both China and India, urban infrastructure markets will be massive.19

While both India and China have unique strengths as well as many similarities, it’s clear that both countries will continue to grow in the coming decades offering global businesses exciting new domestic markets.20

The above content was adapted under a Creative Commons Attribution-NonCommercial-ShareAlike 3.0 License without attribution as requested by the work’s original creator or licensor.

5.1 World Economies by BABU JOHN MARIADOSS is licensed under a Creative Commons Attribution-NonCommercial-ShareAlike 4.0 International License, except where otherwise noted.