Briefly, currency is any form of money in general circulation in a country. What exactly is a foreign exchange? In essence, foreign exchange is money denominated in the currency of another country or—now with the euro—a group of countries. Simply put, an exchange rate is defined as the rate at which the market converts one currency into another.

Any company operating globally must deal in foreign currencies. It has to pay suppliers in other countries with a currency different from its home country’s currency. The home country is where a company is headquartered. The firm is likely to be paid or have profits in a different currency and will want to exchange it for its home currency. Even if a company expects to be paid in its own currency, it must assess the risk that the buyer may not be able to pay the full amount due to currency fluctuations.

If you have traveled outside of your home country, you may have experienced the currency market—for example, when you tried to determine your hotel bill or tried to determine if an item was cheaper in one country versus another. In fact, when you land at an airport in another country, you’re likely to see boards indicating the foreign exchange rates for major currencies. For example, imagine you’re on vacation in Thailand and the exchange rate board indicates that the Bangkok Bank is willing to exchange currencies at the following rates (see the following figure). GBP refers to the British pound; JPY refers to the Japanese yen; and HKD refers to the Hong Kong dollar, as shown in the following figure. Because there are several countries that use the dollar as part or whole of their name, this chapter clearly states “US dollar” or uses US$ or USD when referring to American currency. 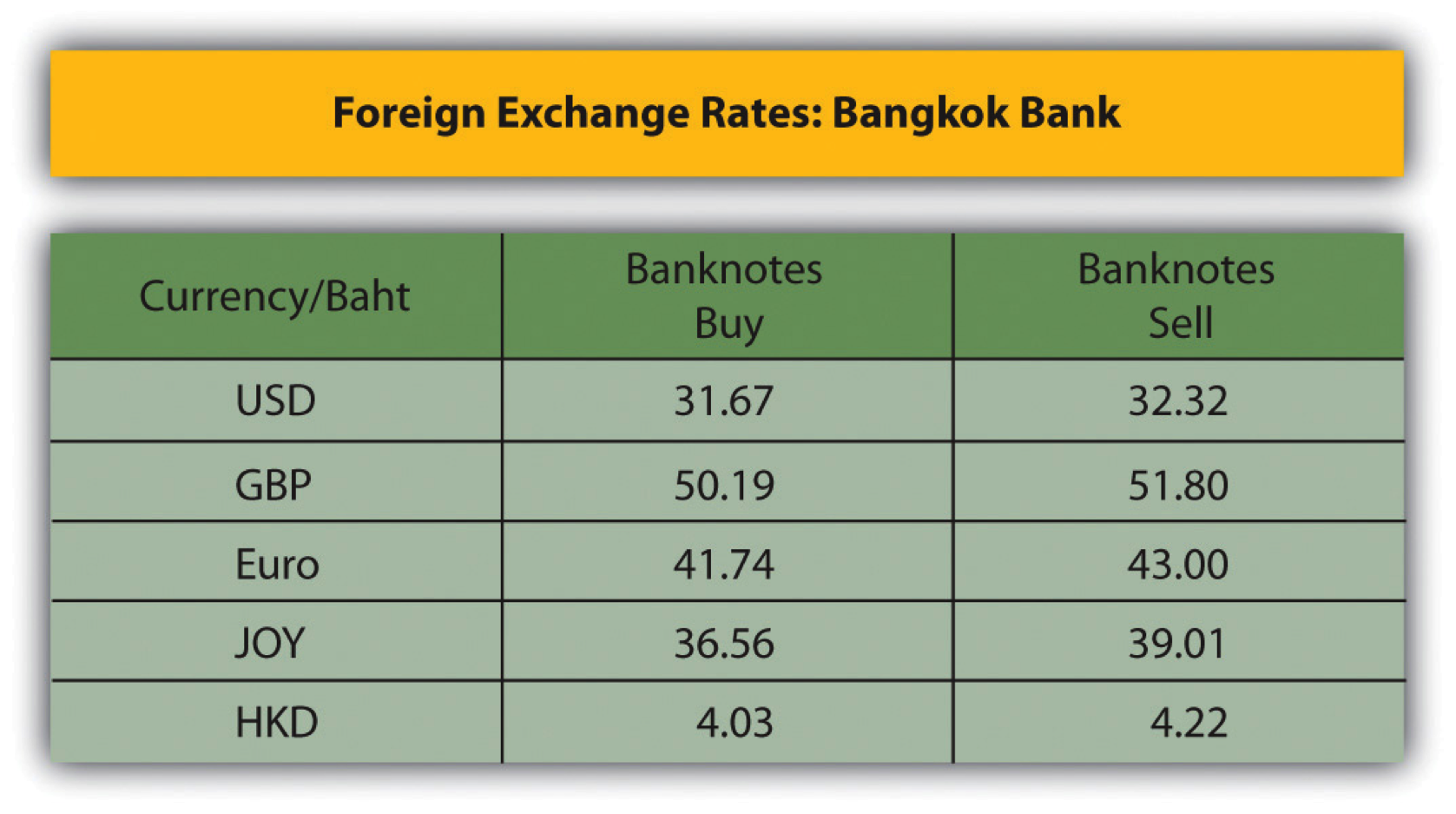 This chart tells us that when you land in Thailand, you can use 1 US dollar to buy 31.67 Thai baht. However, when you leave Thailand and decide that you do not need to take all your baht back to the United States, you then convert baht back to US dollars. We then have to use more baht—32.32 according to the preceding figure—to buy 1 US dollar. The spread between these numbers, 0.65 baht, is the profit that the bank makes for each US dollar bought and sold. The bank charges a fee because it performed a service—facilitating the currency exchange. When you walk through the airport, you’ll see more boards for different banks with different buy and sell rates. While the difference may be very small, around 0.1 baht, these numbers add up if you are a global company engaged in large foreign exchange transactions.

Companies, investors, and governments want to be able to convert one currency into another. A company’s primary purposes for wanting or needing to convert currencies is to pay or receive money for goods or services. Imagine you have a business in the United States that imports wines from around the world. You’ll need to pay the French winemakers in euros, your Australian wine suppliers in Australian dollars, and your Chilean vineyards in pesos. Obviously, you are not going to access these currencies physically. Rather, you’ll instruct your bank to pay each of these suppliers in their local currencies. Your bank will convert the currencies for you and debit your account for the US dollar equivalent based on the exact exchange rate at the time of the exchange.

Understand How to Determine Exchange Rates

How to Quote a Currency

Additionally, there are two methods—the American terms and the European terms—for noting the base and quoted currency. These two methods, which are also known as direct and indirect quotes, are opposite based on each reference point. Let’s understand what this means exactly.

A direct and an indirect quote are simply reverse quotes of each other. If you have either one, you can easily calculate the other using this simple formula:

While you are performing the calculations, it is important to keep track of which currency is in the numerator and which is in the denominator, or you might end up stating the quote backward. The direct quote is the rate at which you buy a currency. In this example, you need US$1.56 to buy a British pound.

Tip: Many international business professionals become experienced over their careers and are able to correct themselves in the event of a mix-up between currencies. To illustrate using the example mentioned previously, the seasoned global professional knows that the British pound is historically higher in value than the US dollar. This means that it takes more US dollars to buy a pound than the other way around. When we say “higher in value,” we mean that the value of the British pound buys you more US dollars. Using this logic, we can then deduce that 1.56 US dollars are required to buy 1 British pound. As an international businessperson, we would know instinctively that it cannot be less—that is, only 0.64 US dollars to buy a British pound. This would imply that the dollar value was higher in value. While major currencies have changed significantly in value vis-à-vis each other, it tends to happen over long periods of time. As a result, this self-test is a good way to use logic to keep track of tricky exchange rates. It works best with major currencies that do not fluctuate greatly vis-à-vis others.

When the home currency of the global marketer weakens, the exchange rates are supposed be favorable to the global marketer, because the home currency will fetch lesser in terms of the foreign currency, and hence the prices of the exported product in the foreign country’s currency will come down. Therefore, the global marketer can cut prices in the foreign country, and hence, increase market share. On the other hand, the global marketer can also decide to maintain the higher prices, in which case the global marketer will see windfall revenue, and increased margins. Thus if the exchange rate of the US dollar relative to the Japanese Yen weakens (lesser Yen for each dollar), then it is good for US companies manufacturing their products in the US and selling them in Japan (e.g. Boeing, Caterpillar, GE). On the other hand, it is not a good pricing scenario for Japanese companies (e.g. Canon and Olympus) who manufacture and sell in Japan against their US competitors. This context is also unfavorable to American tourists who are shopping for cameras, because they would be paying in Yen, and their US dollars would get lesser Yen, relative to what it would have fetched if the US dollar was stronger.

When the domestic (home) currency of the US global marketer strengthens (e.g. U.S.$1 to 1.8315 euros and U.S.$1 to INR 70), where the US dollar will fetch more money in terms of the foreign currency, then this price situation is said to be bad for global marketers who manufacture their products in the US and sell them in the foreign (host) country, priced in the foreign currency. Although each dollar gets more in terms of the foreign currency, what it really means is that the US company will now get lesser dollars after conversion into the US dollar, for the same amount of foreign currency, after the exchange rate strengthening. Thus, the US company may not be able to cover its costs which are specified in US dollars. One strategy to overcome this effect is to manufacture or source their products in the host country, and maximize all expenditures in the local currency (remember, each dollar gets more local currency!).

Since the strengthening of the home (domestic) currency results in more foreign currency, this conversion results in higher prices, which are specified in the local currency. This is usually not a problem if the demand for a product is inelastic. Otherwise, the global marketer has to cut costs in his home country, or improve quality and service to make up for the increased price levels. A drastic strategy to counter this situation would be to absorb some of the costs, which will result in a reduced margin.

12.4 Currency Fluctuations and Global Pricing by BABU JOHN MARIADOSS is licensed under a Creative Commons Attribution-NonCommercial-ShareAlike 4.0 International License, except where otherwise noted.