Nowhere are the effects of globalization seen more drastically than in the automobile industry, especially for the United States “Big 3” automakers: General Motors, Chrysler, and Ford.

Ford’s history dates back to the Model T created by Henry Ford, with the goal of building a car for every family. Today, Ford is in dire competition with not only their domestic competitors, but also now foreign car manufacturers such as Toyota, Volkswagen and Hyundai.

At the current pace, the automotive market is approaching a 50/50 split between United States and overseas-based control of the US market. As a result, Ford is challenged to constantly reevaluate and revamp its market strategy. This is evident, as Ford decided that it was more cost-effective to buy existing networks than to start from scratch, by bringing Jaguar, Volvo, Mazda, Aston Martin and Land Rover under its control. However, Ford has recently decided to sell its stake in both Jaguar and Land Rover to the Indian automaker, Tata, and may divest other divisions as well.

Today, Ford faces a number of important questions. As the globalization of the auto industry continues, how should Ford market its vehicles? What target markets should Ford appeal to? How can it continue to improve production and quality and adhere to the needs of even more demanding customers? And, how should Ford position itself, as a company, in the face of formidable competition?

While the future of Ford is uncertain, one thing is clear, globalization will continue to affect the way domestic and foreign companies do business.

Globalization is difficult to define because it has many dimensions—economic, political, cultural and environmental. The focus here is on the economic dimension of globalization. Economic globalization refers to the “quickly rising share of economic activity in the world [that] seems to be taking place between people in different countries” (World Bank Briefing Paper, 2001). More specifically, economic globalization is the result of the increasing integration of economies around the world, particularly through trade and financial flows and the movement of people and knowledge across international borders (IMF Issue Brief, 2000). 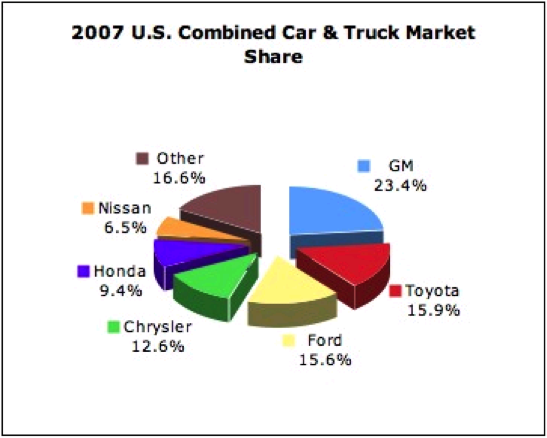 As this figure suggests, the “Big Three” must adapt to changes in the market and globalization factors to remain key players in the automotive market. At one point in 2007, for the first time in history, US automaker’s share of their home market fell below 50 percent.

The importance of International trade lies at the root of a country’s economy. In the constant changing business market, countries are now more interdependent than ever on their partners for exporting, importing, thereby keeping the home country’s economy afloat and healthy. For example, China’s economy is heavily dependent on the exportation of goods to the United States, and the United States customer base who will buy these products.

Foreign Direct Investment (FDI): According to the United Nations, FDI is defined as “investment made to acquire lasting interest in enterprises operating outside of the economy of the investor”.

Capital market flows: In many countries, particularly in the developed world, investors have increasingly diversified their portfolios to include foreign financial assets, such as international bonds, stocks or mutual funds, and borrowers have increasingly turned to foreign sources of funds (World Briefing, Paper, 2001). Capital market flows also include remittances from migration, which typically flow from industrialized to less industrialized countries. In essence, the entrepreneur has a number of sources for funding a business.

Migration: Whether it is physicians who emigrate from India and Pakistan to Great Britain or seasonal farm workers emigrating from Mexico to the United States, labor is increasingly mobile. Migration can benefit developing economies when migrants who acquired education and know-how abroad return home to establish new enterprises. However, migration can also hurt the economy through “brain drain”, the loss of skilled workers who are essential for economic growth (Stiglitz, 2003).

Critics of economic integration often point to Latin America as an example where increased openness to international trade had a negative economic effect. Many governments in Latin America (e.g. Peru) liberalized imports far more rapidly than in other regions. In much of Latin America, import liberalization has been credited with increasing the number of people living below the USD $1 a day poverty line and has perpetuated already existing inequalities (Watkins, 2002).

Conversely, globalization can create new opportunities, new ideas, and open new markets that an entrepreneur may have not had in their home country. As a result, there are a number of positives associated with globalization:

For example, the experience of the East Asian economies demonstrates the positive effect of globalization on economic growth and shows that at least under some circumstances globalization decreases poverty. The spectacular growth in East Asia, which increased GDP per capita by eightfold and raised millions of people out of poverty, was based largely on globalization—export-led growth and closing the technology gap with industrialized countries (Stiglitz, 2003). Generally, economies that globalize have higher growth rates than non-globalizers (Bhagwati and Srinivasan, 2002).

Further, some of the allegations made by critics of globalization are very much in dispute—for example, that globalization necessarily leads to growing income inequality or harm to the environment. While there are some countries in which economic integration has led to increased inequality—China, for instance—there is no worldwide trend (Dollar, 2003). With regard to the environment, international trade and foreign direct investment can provide less industrialized countries with the incentive to adopt, and the access to, new technologies that may be more ecologically sound (World Bank Briefing Paper, 2001). Transnational corporations may also help the environment by exporting higher standards and best practices to less industrialized countries. 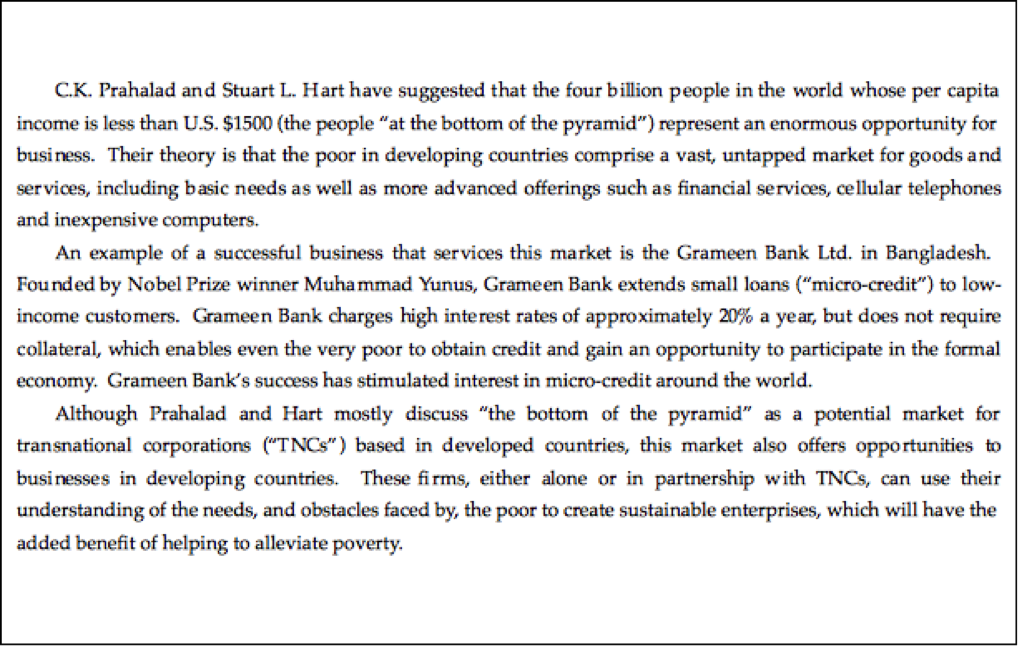 The fortune at the bottom of the pyramid (Prahalad and Stuart)

The above content was adapted from textbook content produced by Global Text Project and is licensed under a Creative Commons Attribution License 3.0 license. Under this license, any user of the textbook contents herein must provide proper attribution as follows: The OpenStax name, OpenStax logo, OpenStax book covers, OpenStax CNX name, and OpenStax CNX logo are not subject to the creative commons license and may not be reproduced without the prior and express written consent of Rice University. For questions regarding this license, please contact support@openstax.org. The original content can be downloaded for free at Download for free at http://cnx.org/contents/d6db603c-cd31-4ca4-be19-d29734673b90@4.3.

1.7 What is Globalization by BABU JOHN MARIADOSS is licensed under a Creative Commons Attribution-NonCommercial-ShareAlike 4.0 International License, except where otherwise noted.