Let’s take a closer look at conflict to understand how it can derail companies and individuals alike—and what to do to prevent such consequences from happening to you. In this chapter, you’ll see that managing conflict and engaging in effective negotiation are both critical to effective organizational behavior within organizations as well as daily life. One of the major ways to avoid conflicts escalating is through understanding the causes of conflict and developing methods for managing potential negative outcomes. Negotiation is one of the most effective ways to decrease conflict and will also be examined in depth in this chapter.

Similar to how conflicts can range from minor to major, negotiations vary in terms of their consequences. A high-stakes negotiation at work might mean the difference between a company’s survival and its demise. On the other end of the spectrum, we deal with minor negotiations on a regular basis, such as negotiating with a friend about which movie to see. Maybe you make a concession: “OK, we’ll watch what you want but I get to pick where we eat.” Maybe you hold tough: “I don’t want to watch anything except a comedy.” Perhaps you even look for a third option that would mutually satisfy both parties. Regardless of the level, conflict management and negotiation tactics are important skills that can be learned. First, let’s take a deeper look at conflict.

Conflict is a process that involves people disagreeing. Researchers have noted that conflict is like the common cold. Everyone knows what it is, but understanding its causes and how to treat it is much more challenging (Wall & Callister, 1995). There are different types of conflict that can arise within organizations. Let’s take a look at each of them in turn.

Intrapersonal conflict arises within a person. For example, when you’re uncertain about what is expected or wanted, or you have a sense of being inadequate to perform a task, you are experiencing intrapersonal conflict. Role conflict, a type of intrapersonal conflict, includes having two different job descriptions that seem mutually exclusive. This type of conflict can arise if you’re the head of one team but also a member of another team. A third type of intrapersonal conflict involves role ambiguity. Perhaps you’ve been given the task of finding a trainer for a company’s business writing training program. You may feel unsure about what kind of person to hire—a well-known but expensive trainer or a local, unknown but low-priced trainer. If you haven’t been given guidelines about what’s expected, you may be wrestling with several options. 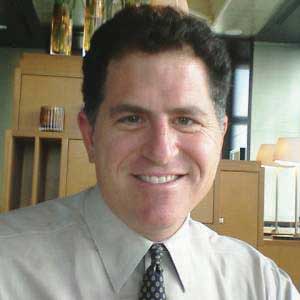 Of the conflict between Michael Dell (shown here) and Steve Jobs, David Yoffie, a professor at the Harvard Business School who closely follows the computer industry, notes that the conflict may stem from their differences in terms of being from different generations and having different management styles.

Interpersonal conflict is among individuals such as coworkers, a manager and an employee, or CEOs and their staff. For example, in 2006 the CEO of Airbus S.A.S., Christian Streiff, resigned because of his conflict with the board of directors over issues such as how to restructure the company (Michaels, Power, & Gauthier-Villars, 2006). This example may reflect a well-known trend among CEOs. According to one estimate, 31.9% of CEOs resigned from their jobs because they had conflict with the board of directors (Whitehouse, 2008). CEOs of competing companies might also have public conflicts. In 1997, Michael Dell was asked what he would do about Apple Computer. “What would I do? I’d shut it down and give the money back to shareholders.” Ten years later, Steve Jobs, former CEO of Apple Inc., indicated he had clearly held a grudge as he shot back at Dell in an e-mail to his employees, stating, “Team, it turned out Michael Dell wasn’t perfect in predicting the future. Based on today’s stock market close, Apple is worth more than Dell” (Haddad, 2001; Markoff, 2006). In part, their long-time disagreements stem from their differences. Interpersonal conflict often arises because of competition, as the Dell/Apple example shows, or because of personality or values differences. For example, one person’s style may be to “go with the gut” on decisions, while another person wants to make decisions based on facts. Those differences will lead to conflict if the individuals reach different conclusions. Many companies suffer because of interpersonal conflicts. Keeping conflicts centered around ideas and the work itself (i.e., task conflict) rather than individual differences (i.e., relationship conflict) is important in avoiding a conflict escalation. 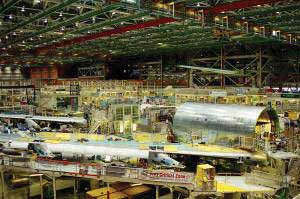 Conflicts such as the Air Canada pilot strike can have ripple effects. For example, Air Canada’s parent company threatened to cancel a $6.1 billion contract with Boeing for new planes if they were unable to negotiate an agreement with the pilots who would fly them. Conflict consequences such as these could affect those working at this Boeing Factory in Seattle, Washington.

Intergroup conflict is conflict that takes place among different groups. Types of groups may include different departments or divisions in a company, an employee union and management, or competing companies that supply the same customers. Departments may conflict over budget allocations; unions and management may disagree over work rules; suppliers may conflict with each other on the quality of parts. Merging two groups together can lead to friction between the groups—especially if there are scarce resources to be divided among the group. For example, in what has been called “the most difficult and hard-fought labor issue in an airline merger,” Canadian Air and Air Canada pilots were locked into years of personal and legal conflict when the two airlines’ seniority lists were combined following the merger (Stoykewych, 2003). Seniority is a valuable and scarce resource for pilots, because it helps to determine who flies the newest and biggest planes, who receives the best flight routes, and who is paid the most. In response to the loss of seniority, former Canadian Air pilots picketed at shareholder meetings, threatened to call in sick, and had ongoing conflicts with pilots from Air Canada. The conflicts with pilots continue to this day. The history of past conflicts among organizations and employees makes new deals challenging.

Most people are uncomfortable with conflict, but is conflict always bad? Conflict can be dysfunctional if it paralyzes an organization, leads to less than optimal performance, or, in the worst case, leads to workplace violence. But a moderate amount of task conflict can actually be a healthy (and necessary) part of organizational life (Amason, 1996). To understand how to get to a positive level of conflict, we need to understand its root causes, consequences, and tools to help manage it. The impact of too much or too little conflict can disrupt performance. If conflict is too low, then performance is low because assumptions remain unchallenged. If conflict is too high, then performance also tends to be low because the conflict distracts from the work. The goal is to hold conflict levels in the middle of this range. While it might seem strange to want a particular level of conflict, a medium level of task-related conflict is often viewed as optimal, because it represents a situation in which a healthy debate of ideas takes place.

Figure 10.4 The Inverted U Relationship Between Performance and Conflict 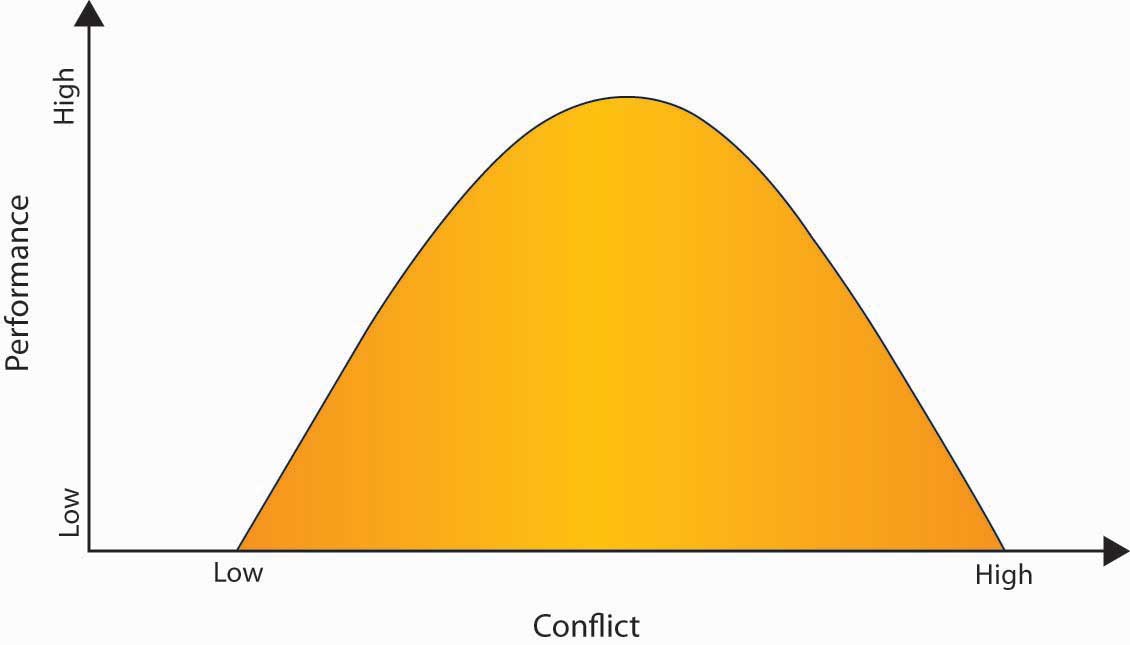 Task conflict can be good in certain circumstances, such as in the early stages of decision making, because it stimulates creativity. However, it can interfere with complex tasks in the long run (De Dreu & Weingart, 2003). Relationship conflict, such as personal attacks, are rarely healthy because they cause stress and distress, which undermine performance. An exception to this might be a situation in which a relationship conflict brings to the surface a simmering interpersonal problem that must be hashed out before productivity can prevail. The worst cases of relationship conflicts can lead to workplace bullying. At Intel Corporation, all new employees go through a 4-hour training module to learn “constructive confrontation.” The content of the training program includes dealing with others in a positive manner, using facts rather than opinion to persuade others, and focusing on the problem at hand rather than the people involved. “We don’t spend time being defensive or taking things personally. We cut through all of that and get to the issues,” notes a trainer from Intel University (Dahle, 2001). The success of the training remains unclear, but the presence of this program indicates that Intel understands the potentially positive effect of a moderate level of conflict. Research focusing on effective teams across time found that they were characterized by low but increasing levels of process conflict (how do we get things done?), low levels of relationship conflict with a rise toward the end of the project (personal disagreements among team members), and moderate levels of task conflict in the middle of the task time line (Jehn & Mannix, 2001).

Amason, A. C. (1996). Distinguishing the effects of functional and dysfunctional conflict on strategic decision making: Resolving a paradox for top management teams. Academy of Management Journal, 39, 123–148.

Stoykewych, R. E. (2003, March 7). A note on the seniority resolutions arising out of the merger of Air Canada and Canadian Airlines. Paper presented at the American Bar Association Midwinter Meeting, Laguna Beach, CA.

10.2 Understanding Conflict by Leah Sheppard is licensed under a Creative Commons Attribution-NonCommercial-ShareAlike 4.0 International License, except where otherwise noted.