From early adolescence to emerging adulthood, an individual develops vital constructs of the human psyche, including self-concept (in early adolescence) and identity (in later adolescence) (Sponcil & Gitimu, 2013). According to Khan et al. (2016), nowadays, adolescents use social media to fulfill their developmental needs, such as “intimacy, self-expression, and identity exploration” (p. 940). Social media can serve a vital function in the formation of adolescents’ self-concept by affecting who they want to be (internally, through the process of self-definition) and how they want to reach this goal (externally, through the process of validation by others) (Valkenburg & Peter, 2011). Arnett (2000) also explained the formation of identity during emerging adulthood as when an individual is exploring who they are and making life-long decisions based on peers’ feedback. Similarly, perceiving approval and support from significant others in the media can play an essential role in shaping identity construction (Ward, 2004). The social context of adolescents has expanded by the creation of digital media technologies, which increases the awareness of youths about their interpersonal relationships and their associated roles in different social backgrounds (Davis 2013). In this respect, the findings of Valkenburg and Peter (2008, 2009, 2011), Sponcil and Gitimu (2013), Khan et al. (2016), Ward (2004), and Davis (2013) help to form a theory-driven conceptual model to elaborate the role of social media communication and actual social connectedness on adolescents’ psychosocial development (identity formation, sexual self, and psychological wellbeing).

Previous studies considering the relationship between social media and adolescent identity formation have two commonalities: (1) developmental consequences and (2) psychosocial opportunities/ challenges. First, the influence of social media use on adolescents has often been investigated to clarify the psychological, physical, and social consequences of this relationship (Valkenburg & Peter, 2009). In this respect, Arnett (1995) elaborated how communication through social media as an independent source from other regular socialization agents, such as family, school, and community, can influence the elements of self-socialization, including “entertainment, identity formation, high sensation, coping, and culture identification,” among adolescents (p. 519). Ward (2003) also addressed the theoretical mechanism for and potential results of exposure to entertainment media on the sexual socialization of youth.

Model of Psychosocial Development and Social Media Use

In the simplified model in Figure 1, social media communication and offline social connectedness are independent concepts that can have joint and separate influences on other parts of the model. The self and identity are merged as one construct because the formation of both is interdependent on each other, and they have a facilitatory role in this model. Psychosocial wellbeing and the sexual self are dependent constructs that are considered as essential outcomes of adolescents’ psychosocial development. 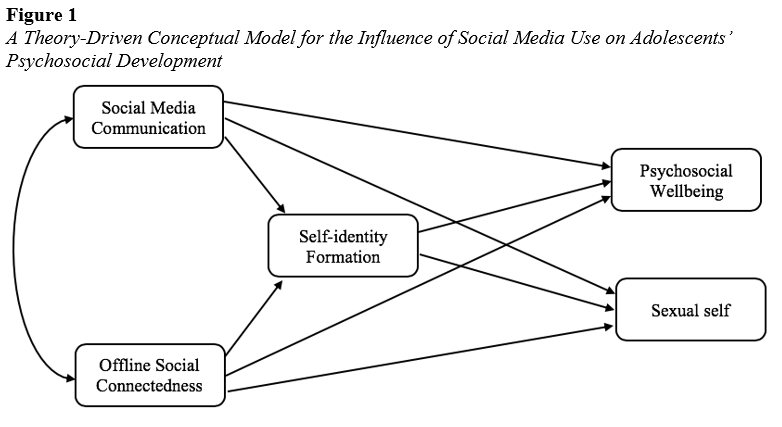 The precursors of this model are based on the review of Valkenburg and Peter (2011) of the three critical tasks in adolescents’ psychosocial development: (1) achieving a sense of trust about who they are and what they want to be to develop self or identity, (2) acquiring a sense of intimacy with others to create and manage meaningful relations, and (3) discovering their sexual orientation to build and engage in healthy sexual relationships.

This model combines the three main dimensions of adolescent’s psychosocial development (self-identity, psychological wellbeing, and sexual self) in relation with either online or offline socialization.  First, in exploring the formation of self-identity, Urista et al. (2009) maintain, “social media sites empower users to take an active role in their socialization process and in constructing their self-identity” (as cited in Sponcil & Gitimu, 2013, p. 5). Nurmi (2004) states one of the definitions of self-concept during adolescence as “the relatively stable schemata of oneself that are generalized to the extent that they refer to an individual’s view of him- or herself across different situations” (as cited in Khan et al., 2016, p. 941). Self-concept as a multidimensional construct, according to Harter (2012), consists of the cognitive, social, and physical selves (Jackson et al., 2010). Erikson (1950, 1968) defined the construct of “identity” as the center of developmental changes in adolescence, which constitutes the senses of coherence and consistency that come from social interactions with close friends and family members (as cited by Davis, 2013). The functions of identity provide a structure for a sense of personal coherence within various social contexts, integrating diverse aspects of self, and organizing an individual’s different experiences (Adams & Marshall, 1996; Berzonsky, 2003a, 2003b; McAdams, 1996).

Second, social communication and wellbeing, the context of social connectedness of adolescents (e.g., friends, family members) have changed due to the emergence of “digital media technologies, such as mobile phones and social network systems” (Davis 2013, p. 2281). As social media can have a prominent role in forming and maintaining relationships during adolescence (Valkenburg, Peter, & Schouten, 2006), the joint association between social media and other social contexts can also influence the development of self-concept (Khan, et al., 2016). Any normal or derivative changes in each part of the self can facilitate positive and/or negative (depression, anxiety) mental health outcomes (Khan, et al., 2016).

Many possible ways exist to use the model for practical and research purposes. For practical purposes, the findings of studies can be useful for programmers to determine the effects of targeted online networks on mental and social aspect of life and improve the experience of users (Seidman, 2013; Kosir et al., 2016; Wilson et al., 2012; Yang & Brown, 2016).

For research purposes, fruitful further research might pursue the effects of social media on adolescents’ self-identity to examine the elaborated connections and factors based on the proposed theoretical model and the suggestions from the selected literature. This field of inquiry needs more research because it is vital to know the lifelong consequences of using social media networks on individuals’ psychosocial lives. Although reliable quantitative techniques (e.g., SEM, regression analysis, model analysis) have been used with a high number of participants in many studies, researchers can explore the qualitative differences of offline and online communications (Khan et al., 2016) or develop better instruments to measure social media use (Blomfield Neira & Barber, 2014). As few studies include sexual self in their investigations, future research can also investigate more aspects of this factor in the relationship between social media use and adolescents’ psychosocial development.

This model is based on research limited to Western populations, and future studies can explore similarities and differences in how the model works based on the experiences that may differ between the participants from a different cultural, societal, and psychological backgrounds.

Seidman, G. (2013). Self-presentation and belonging on Facebook: How personality influences social media use and motivations. Personality and Individual Differences, 54, 402-407.

Sponcil, M. and Gitimu, P. (2013). Use of social media by college students: Relationship to communication and self-concept. Journal of Technology Research.

Ward, L. M. (2003). Understanding the role of entertainment media in the sexual socialization of American youth: A review of empirical research. Developmental Review, 23, 347-388.

Ward, L. M. (2004). Wading through the stereotypes: Positive and negative associations between media use and black adolescents’ conceptions of self. Developmental Psychology, 40(2), 284-94.

Psychosocial Development and Social Media Use Theory by Joy Egbert and Mary Roe is licensed under a Creative Commons Attribution-NonCommercial 4.0 International License, except where otherwise noted.