Some studies have tested the effects of MT on the motivation and academic achievement of students. For example, one longitudinal set of studies conducted an intervention that investigated how high school students’ beliefs about intelligence affected their performance in mathematics (Blackwell, Trzesniewski & Dweck 2007). Two studies were conducted to test the effects of mindsets on academic achievement. In Study One, MT was tested on 373 7th grade students with a growth mindset. The elements of the growth mindset were defined to include learning goals, positive beliefs about effort, and causal attribution strategies. In Study Two, an intervention was tested on 48 seventh graders and compared to a control group of 43 seventh graders. The results of the study indicated that students with a fixed mindset experienced a flat curve in their academic achievement, while those with a growth mindset experienced an upward movement of the performance curve, indicating an improvement in their grades over the same period. These studies indicate that student’s beliefs about intelligence can impact performance regardless of differences in natural ability or potential.

In another study, Burnette et al. (2018) explored the effects of a growth mindset intervention on academic performance by conducting an experiment with 222 10th grade adolescent girls from a rural low-income high school in the southeastern United States. The results indicated that, relative to the control group, students who received the mindset intervention reported a stronger growth mindset four months after the program. The effect of the experiment on the grades of the students was not significant. However, student motivation and self-efficacy improved due to shifts to a growth mindset.

Further, Aronson, Fried, and Good (2001) conducted an experiment to reduce the impact of the stereotype threat on the academic and psychological engagement of students by reinforcing to the students the notion of a growth mindset. Stereotype threat (Steele & Aronson, 1995) suggests that negative stereotypes have an undesirable impact on the achievement of Black students. This phenomenon is believed to undermine the academic and psychological engagement of Black students. Consequently, the results of the study indicated that the students who were exposed to interventions that emphasized that intelligence is malleable recorded improvement in grades. The findings also revealed that the students were academically engaged and enjoyed the teaching and learning process.

Finally, Uttal (1997) studied the attitudes and beliefs of Asian and American mothers and their children about mathematical ability by assessing the importance of four aspects of a school child’s performance. The elements were effort, natural ability, difficulty of school work, and luck or chance. The results show that American mothers rated natural ability as more significant to the academic achievement of their children (a fixed mindset). In contrast, Asian mothers rated performance as more important (a growth mindset). Uttal argues that the perception of Asian and American mothers accounts for the differences in performance between Americans and Asians on international mathematics assessments.

Figure 1 illustrates the key concepts, construct, and proposition of MT. 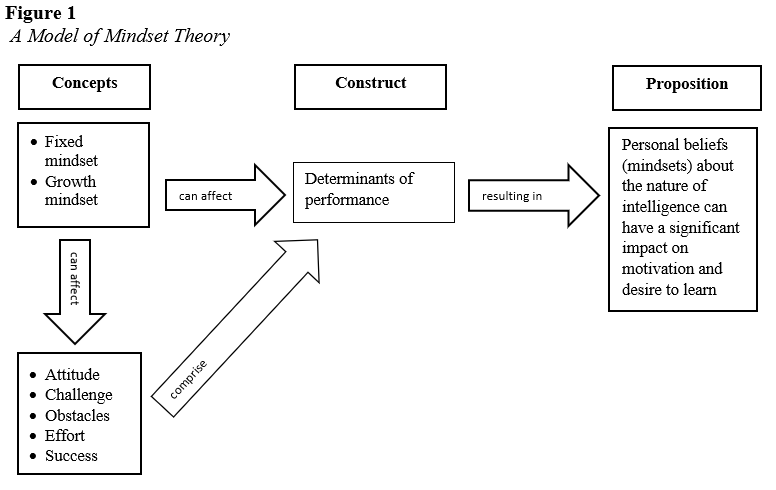 The concepts of MT include fixed and growth mindsets. Individuals who view intelligence as fixed may avoid challenges or easily give up when they are confronted with obstacles. Furthermore, the individual will perceive effort as unimportant and may also ignore negative feedback. In contrast, students with growth mindsets desire to learn and improve; they embrace challenges, persist in the face of setbacks, learn from criticism and negative feedback, and regard effort as part of the growth. Differences in student motivation and desire to learn are explained by the construct of determinants of performance, which includes concepts such as attitudes, challenges, obstacles, effort, and success. The attitude of students toward academic tasks that are difficult and challenging could be traced to the belief held by the student about the nature of intelligence.

Uses of Mindset Theory in Research

MT may be applied in research in physical domains such as sports. For example, one may investigate how mindset may affect the performance of individuals in sporting activities such as golf and basketball. In educational research, it could be used as a theoretical framework in research studies that seek to investigate the psychological factors that make some students excel even when they are confronted with challenges, while other students with similar abilities fail. The theory could also be utilized for predicting the attitude of students with either mindset toward academic support services. It could also be used to investigate the effects of social conditioning, positive reinforcement, and other social-psychological factors on academic achievement and performance. Also, it might be interesting to investigate whether mindsets can be changed. In the area of literacy education, implicit beliefs of pre-service teachers about how children learn to read could be used to investigate teaching practices.

This chapter discusses the impact of Mindset Theory on academic achievement and behavioral outcomes. Implicit theories can be explored for investigating the effects of motivation, self-awareness, and self-efficacy in other domains such as sport. The question of whether mindsets can be changed is not fully settled in the current literature, nevertheless, it is known that self -theories and beliefs require a lot of reflection and determination on the part of individuals to modify behavior. In summary, the concepts, construct, and proposition of this social-cultural theory offer tools for investigating, evaluating, and explaining the impact of interventions and programs in education and other domains.

Bandura A. (1986). Social foundations of thought and action: A social cognitive theory. Prentice-Hall.

Shenk, D. (2010). The genius in all of us: New insights into genetics, talent, and IQ.  Knopf Doubleday Publishing Group.

Mindset Theory by Joy Egbert and Mary Roe is licensed under a Creative Commons Attribution-NonCommercial 4.0 International License, except where otherwise noted.