Multimedia Learning Theory (MMLT) was originally developed by Richard Mayer in 1997. It falls under the grand theory of Cognitivism. According to Mayer (1997), multimedia learning theory consists of three aspects that help students learn more effectively. The first one is that there are two channels, namely audio and visual, for information processing; this is also known as the multimedia principle. This principle states that students may learn better from images and words than just from words. The second aspect is that each channel has a limited capacity to process information. In other words, human beings can only process information in limited amounts, and they try to understand the information by creating mental representations from the information sources. The last aspect is that learning is an active process of filtering, selecting, organizing, and integrating information based on existing knowledge.

Mayer (2002) also stated that the process of transferring knowledge from two channels (audio and visual) could be successful when information is integrated with existing knowledge. So, when students are actively processing incoming information, they also use their existing knowledge to help the process. For example, a group of tourists taking a tour in London will benefit more when a tour guide is explaining what they see around them. In other words, multimedia does not necessarily mean technology, instead whatever involves two channels is what defines multimedia.

Researchers have investigated the role of multimedia learning on students’ achievement, and many studies provide evidence that MMLT is still valid and evolving in current educational practice. Several studies have shown that students tend to have positive learning experiences using multimedia learning materials. For example, a study conducted by Ercan (2014) showed that multimedia has an important role for students’ achievement. The researcher examined the effect of multimedia learning material on 62 5th grade students’ academic achievement and attitudes toward science courses. The participants were divided into control and experimental groups and were given a test on the topic of “Food and Healthy Nutrition.” The findings showed a significant difference in the achievement post-test between the two groups. The experimental group had higher score than the control group. The findings align with what Mayer (2002) said about multimedia learning, that students learn more effectively with multimedia materials.

McTigue (2009) conducted another study that shows the significance of MMLT. The purpose of her study was to measure the importance of multimedia presentations to students’ reading. Students in the experimental group read a science text with an illustration or diagram, while the other read text only. The study showed that students benefited more when reading with diagrams or illustrations. These findings raise concerns about the implementation of multimedia uses in classroom practice; the scant use of multimedia is the main concern that educators need to address in classroom settings. Teachers should present their materials in more attractive ways such as using more media to optimize students’ learning experiences.

Further, Chang et al. (2010) conducted a study that applied multimedia material. They investigated the effects of multimedia uses on 7th-grade students’ academic performance in science class. The researchers administered basic science tests to three different groups of participants. Findings showed that the students in the experimental group, taught with multimedia materials, had a higher score on the test. In other words, the findings indicated that the students taught with multimedia learned more successfully than the groups taught with traditional methods.

Figure 1 presents a model of MMLT. 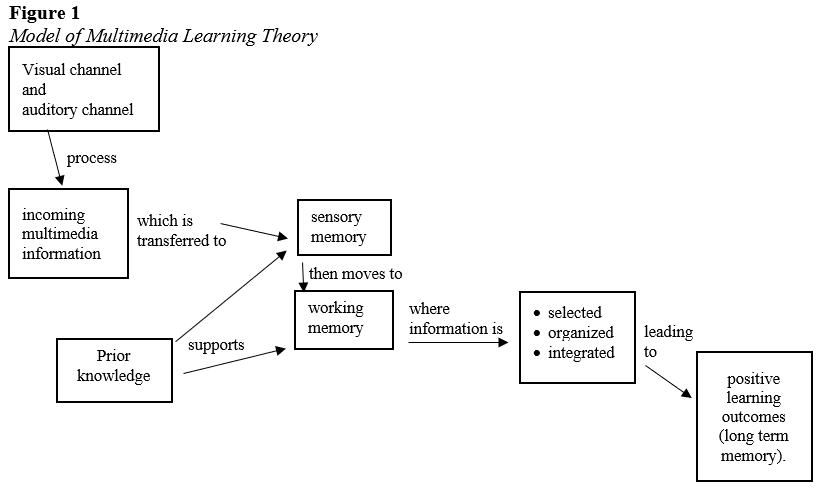 Visual and auditory information is taken in and transferred to sensory memory (short term memory). Mayer (2002) explains that short term memory is the first place where information is processed. After that, all the information (sounds and pictures) is transferred to the working memory. The working memory is where learners actively select the materials and organize them. The purpose of the selecting and organizing process is to dynamically produce logical mental constructs. The two memories have similar functions, however, the sensory memory process information temporarily until it reaches long-term memory. Mayer also stated that integrating the information with prior knowledge is significant to successfully transfer the knowledge.

The theory proposes that, by combining information from the two channels, the information is transferred from short-term to working memory to be processed in-depth with the help of prior knowledge, and that processing helps the information stay in the learners’ long-term memory (Yue et al., 2013). The key idea of the theory is that students can learn more effectively when they are given two or more media and are engaged in processes of selecting the most relevant materials, organizing them into cognitive mental representations, and finally integrating them with their prior knowledge. In short, multimedia learning occurs when people build mental representations from words (such as spoken text or printed text) and pictures (such as illustrations, photos, animation, or video) to process information and integrate them with prior knowledge. This process improves the possibility that the information will go to long-term memory.

In classroom practice, this model can be used in many ways, for example, to help students explore the world. In geography class, teachers can apply this model to teach geographical areas such as the highest mountain or the longest river using a digital world map that uses both audio and visual information. This may promote deeper understanding as students can process more than one source of information. Most students cannot easily process information from texts only because it is difficult from them to process the information without visualization. Teachers should be aware that two sources of information help students learn more effectively, as they can process more information at the same time. This process will help them transfer the knowledge to long-term memory.

Researchers can use the model to examine the role of auditory and visual sources such as 3D videos to promote effective learning. Today, we live in an era where technology is booming. There are many sources of teaching materials that provide two or more information sources to create more attractive teaching and learning process. Furthermore, the model can also be used to measure the theory’s effectiveness for different kinds of populations and media tools.

To sum up, MMLT suggests a way that can help students learn more effectively as they are more engaged in processing information. It will also create more fun in the learning activities as they find the materials interesting and engaging.

Ercan, O. (2014). The effect of multimedia learning on students’ academic achievement and attitudes towards science courses. Journal of Baltic of Science Education, 13(5), 608-622.

Multimedia Learning Theory by Joy Egbert and Mary Roe is licensed under a Creative Commons Attribution-NonCommercial 4.0 International License, except where otherwise noted.