Locke, et al (1981) defined the “goal” in Goal-Setting Theory (GST) as “what an individual is trying to accomplish; it is the object or aim of an action” (p. 126). According to Moeller et al. (2012), goal setting is the process of establishing specific and effective targets for task performance. Locke, et al. (1981) also provided evidence that goal setting has a positive influence on task performance. Latham and Locke (2007) explained that “a specific high goal leads to even higher performance than urging people to do their best” (p. 291).

Before the 1960s, some researchers began to study the effectiveness of setting goals in business. The results showed that goal setting has a positive influence on workers’ performance. However, there was a lack of theoretical framework to explain why and how goal-setting influences work performance (Latham & Locke, 2007). GST served to explain human behavior in specific work situations (Locke, 1968). After a lot of experimental research done by Locke and Latham, GST was formalized in 1990 (Locke & Latham, 1990; Locke & Latham, 2002). The theory is now seen as “one of the most influential frameworks in motivational psychology” (Nebel et al., 2017, p. 102).

Studies that employ GST can be divided generally into three domains. First, in academics, setting goals was shown to have a significant influence on students’ learning performance (see, e.g., Gardner et al, 2016; Locke & Latham,1990; Locke & Latham, 2002). For example, Gardner et al. (2016) invited 127 medical students to participate in surgical skill training. They found that goal setting was effective in helping new students acquire surgical skills, especially when students develop specific strategy and goal orientations. In other words, the study found that students have better learning performance when they have clearer and more specific goals. In addition, Neble et al. (2017) had 87 students play the video game Minecraft (Mojang, 2011), and the results showed that for those students who set specific goals, their cognitive load was lowered. Further, Moeller and colleagues (2012) conducted a five-year quasi-experimental study on the relationship between goal setting and the performance of Spanish language learners in high school. The results indicated that having high-quality goals contributed to students’ better language acquisition.

Second, Latham and Locke (2007) pointed out in their study that, in the field of organization and human resource management, goal setting can have an impact on employees’ behavior and performance in the workplace. Based on this idea, 108 middle level banking managers in Indonesia were invited by Aunurrafiq et al. (2015) to investigate whether setting goals could have a positive impact on their managerial performance. They provided evidence that goal specificity, goal participation, and goal commitment are significant factors in enhancing managers’ managerial performance. In addition, Brown and Latham (2000) invited 36 unionized employees in a Canadian telecommunications company to test the effectiveness of three ways to increase employees’ performance. Their results indicated that the employees with specific and challenging goals reached higher performance levels than those who set goals along with self-instructions to do their best.

Third, goal setting has also been popularized in the field of sports. According to Weinburg and Butt (2014), “Setting goals can help athletes prioritize what is the most important to them in their sport and subsequently guide daily practices by knowing what to work on” (p. 343). Locke and Latham (1985) concur. In Locke and Latham’s (1985) study, they found that setting goals can be more effective in sports because the performance of sports is easier to measure. In another study, Burton et al. (2010) investigated the impact of incorporating goal setting and goal strategies between highly effective and less effective athletes among 570 college athletes who participated in 18 sports at a university. The results indicated that goal setting had a positive impact on their performance, and the athletes who set goals and implemented goal strategies more frequently tended to be both more effective than others and have better sports performance. Finally, a study conducted by Bueno et al. (2008) on the effectiveness of goal setting on endurance athletes’ performance indicated that goal setting is effective in increasing efficacy, which leads to better performance in endurance sports.

This model in Figure 1 is adapted from Locke and Latham (2002) and consists of three parts: concepts, constructs, and a proposition. The concepts include key factors that affect peoples’ performance, with moderators and mediators that might affect the goals that are set. The constructs indicate that these concepts impact people’s performance and motivation. The proposition shows that a specific and challenging goal, combined with regular feedback, can increase motivation and productivity so that people can perform better. These model aspects are described below. 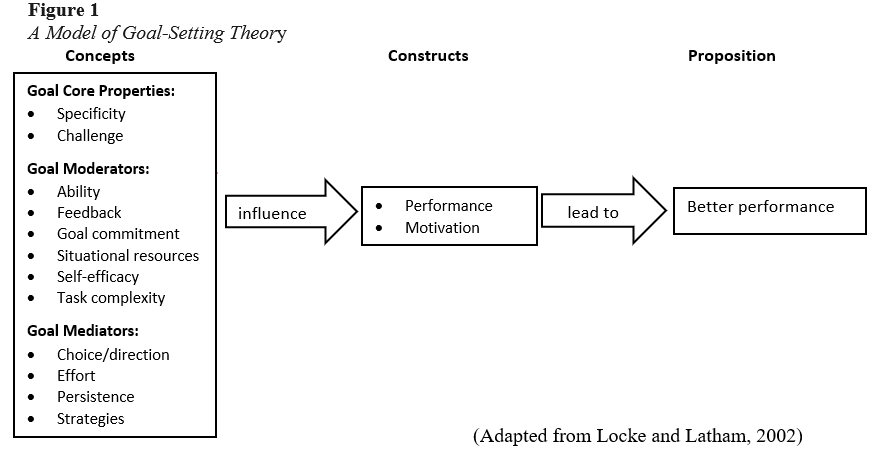 Locke (1990) pointed out that there are some significant factors that can impact an individual’s performance: core goal properties (e.g., specificity, challenge), moderators (e.g. ability, feedback, goal commitment), and mediators (e.g., choice, effort). Latham (2003) pointed out in one study that individuals who have specific, challenging, but attainable goals have better performance than those who set vague goals or do not set goals. Meanwhile, individuals should possess ability and have commitment to the goal to have better performance.

For the part of moderators, Locke (1990) explains ability as whether people possess skill or knowledge to finish the task. Feedback is also needed for people to decide whether they should put forth more effort or change their strategy. Moreover, goal commitment refers to whether individuals have the determination to realize the goal. In addition to ability, feedback, and commitment, task complexity is also considered important; it indicates that people tend to have better performance when the tasks are more straightforward. In addition, situational resources, the related resources or materials provided for individuals to achieve their goal, are also essential. Finally, self-efficacy refers to whether people are confident in doing something and that it will affect their goals and performance (Locke & Latham, 1990).

For the part of mediators, choice means that people will make an effort towards the goal-relevant activities when they choose to set specific and difficult goals. Furthermore, persistence refers to how long people will stick to the goal and if individuals are willing to spend time on achieving it. If so, they may have better performance (Locke & Latham, 1990). Finally, a specific, high goal needs a strategy to attain it.

According to the discussion above, with these important factors (e.g. specificity, challenge, ability, feedback, effort) in the concepts, people tend to have better performance and are more willing to face new challenges. Performance consists of a variety of behaviors, from test-taking to running a competitive race.

To conclude, the proposition of GST is that when the concepts are optimal for an individual, better performance can result. What is optimal for each individual is a subject for research.

Goal-setting theory could be used in different domains such as teaching or research. In teaching, for example, this theory could be used as an instructional procedure to improve students’ writing performance for those who have difficulty in learning writing. By setting specific goals of what will be written in each paragraph, students may perform better in their writing class (Page & Graham, 1999). In addition, Nebel, et al. (2017) mentions that GST can also be used while using educational video games such as Minecraft; goal setting can reduce students’ cognitive load when they set specific goals. Moreover, players who use educational video games and follow a specific learning goal can be impacted affectively by goal setting. In other words, students tend to become more engaged and show greater passion in finishing the task when they have clear goals. Moreover, Idowu, et al. (2014) invited 80 senior secondary school students to investigate whether goal setting skills are effective for students’ academic performance in English, and the results indicated that the incorporation of a goal setting strategy can enhance students’ academic performance in English. In other words, teachers can encourage students to create goals that can support their academic performance.

To conclude, goal setting can play a significant role in enhancing people’s motivation and performance. People who set specific, challenging goals and commit to these goals are more likely to try their best and persist in achieving the goals, which can lead to better performance and success.

Page, V., & Graham, S. (1999). Effects of goal setting and strategy use on the writing performance and self-efficacy of students with writing and learning problems. Journal of Educational Psychology, 91(2), 230-240.

Goal-Setting Theory by Joy Egbert and Mary Roe is licensed under a Creative Commons Attribution-NonCommercial 4.0 International License, except where otherwise noted.