Initially, studies that examined how relationships of care and connection make moral judgments and decisions difficult relied upon gendered distinctions among participants (Gilligan, 1982). For example, whereas a boy would make a “just” decision, a girl seemed “unsure” (p. 204).  Later, however, Gilligan and Wiggins (1987) concluded there is “no neutral position from which to comment on sex differences” (p. 279), relying instead on the potentially inescapable perspective of one’s gender.  Exploring individual caring relationships that lead to understanding how and why moral decisions are made, regardless of gender, became the foundation of care theory.

In the last thirty-five years, Noddings (2002) fostered and developed care theory, focusing primarily on the value of relationships. She notes that “all teachers are moral educators” with a responsibility to produce “better adults” (Noddings, 2015, p. 235) and “education is relation” (Noddings, 2016, p. 67); therefore, individual receptive actions between carer and cared-for serve as the very foundation for care theory.  These relationships, demonstrated through modeling, dialogue, practice, and confirmation, are the means for teachers and leaders to encourage a moral life, however it is defined, which is then evidenced in decision-making among students.  For a comprehensive look at Noddings’ work and the complexities of care in education, see Owens and Ennis (2005).

Previous studies that apply care theory fall into two distinct categories: 1) studies that attempt to utilize care theory in the classroom toward measured outcomes, and 2) studies that apply care theory to leadership practices in education more generally.  One commonality to all the studies is that they recognize the need for a relationship between the carer and the cared-for. Placing care theory into these two categories helps answer the question, “How shall we live well together?” (Strike, 2007, p. 19) through moral decision-making and provides input into how teachers and leaders can create caring relationships.

In education leadership, studies have emerged to explore the impact of care theory in making ethical decisions (Bass, 2009; Kropiewnicki & Shapiro, 2001); many of these studies employ a qualitative methodological framework, using interviews and case studies of women in general and women of color in particular. These studies provide evidence that, within their spheres of influence, women are responding to injustices even when their personal interest is at risk (Bass, 2009). Their demonstration of care is seen by their ability to identify with the situation, take responsibility, and accept consequences that may occur (Bass, 2009).  Kropiewnicki and Shapiro (2001) demonstrate care theory at work through case studies in which their participants (female principals) respond not only to the problem at hand, but also to the circumstances that surround the problem.  As an extension of care toward others, the principals appear to care about the situation, including ideas and causes, as they relate to consequences of the problem.

In the classroom, care theory has also been identified as a pathway to potentially improve student outcomes across grades and cultures (Newcomer, 2018; Noddings, 2012; Meyers, 2009).  For example, Noddings (2012) argues that an important task for teachers is to “connect the moral worlds of school and public life” (p. 779). Several studies demonstrate how this is possible in a contemporary classroom, including in higher education. Specifically, Meyers (2009) presents literature that demonstrates that students “identify rapport as an important and discrete dimension of college teaching” (p. 208).  Caring can be implemented at any level by building a relationship between the faculty member and the student through verbal immediacy (Meyers, 2009, p. 207). Newcomer (2018) provides evidence of the benefit of a caring relationship specifically between Latinx students and teachers, noting that feeling like a family can make a positive difference in a student’s life.

Several researchers describe how the inclusion of moral development in the classroom happens in multiple ways—outside of the traditional conversation or explicit demonstration of care (Hilder, 2005; Shevalier & McKenzie, 2012; Zembylas, 2017).  For example, texts that model ethical decision makers through storytelling can be influential at any grade level to illustrate care (Hilder, 2005). In higher education, disruptive teaching relies on caring relationships, too. For example, when it is considered alongside critical care theory and pushes students to ask and respond to uncomfortable questions, it relies on the establishment of relationships of care to provoke questions of equity and power relationships, and it challenges the increased “emotional burden of responsibility allocated to marginalized groups who have to deal with the choices made by privileged groups” (Zembylas, 2017, p. 10).  In addition, culturally responsive teaching relies on caring, particularly when “teachers view dialog and attention as integral parts of the teaching and learning process” (Shevalier & McKenzie, 2012, p. 1995).  These studies demonstrate that once a foundation of a caring relationship is established, modeling, dialogue, practice, and confirmation make the nuances of future student moral decision making more distinct and explicit.

The basis of the model presented in Figure 1 is a relationship defined by receptive attention between the cared-for and carer. The aim is not to “produce people” (Noddings, 2002, p.9), but rather to contribute to understanding how moral decisions are made. 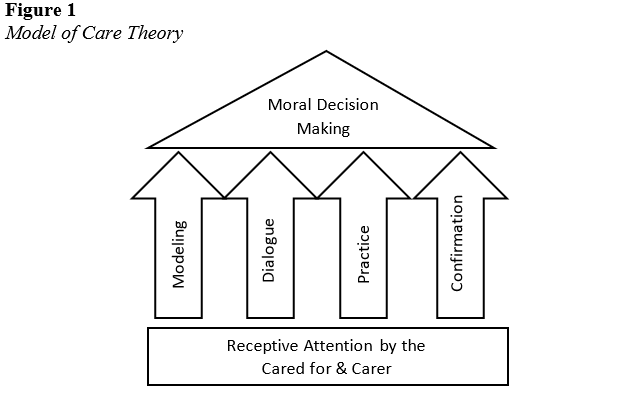 The four main concepts in care theory, strengthened by the foundation of receptive care, are modeling, dialogue, practice, and confirmation (Noddings, 2002). Together these concepts strengthen the ability to understand how moral decisions are made; however, they can be taken singularly and still achieve that goal. Teachers and leaders may already engage in these behaviors, as described in Table 1.

As an educator approaches a relationship with a student, the model demonstrates a way to critically consider teacher behaviors, approaches, and even course design.  The questions listed below are ways for educators to critique themselves, the conduct of their classrooms, and/or their leadership styles to determine how care is being utilized and whether a student could benefit from the explicit presence of care.

Not all four concepts are simultaneously needed to guide the moral decision- making process; however, by incorporating each aspect, care can be improved.

It is imperative that the care is recognized by the carer and cared-for for the model to be effective.

When approaching education research either in leadership or instruction, the model represents how care can be developed and demonstrates how the concepts build an understanding of how moral decisions are made. The questions and statements listed below are examples of approaches one can take to design a study and also to critique one’s own conclusions about the role of care and relationships:

Care theory, built on the foundation of a relationship between the carer and cared-for, demonstrates that, with the explicit behaviors of modeling, dialogue, practice, and confirmation, teachers and leaders can encourage moral decision-making. Although these decisions are not pre-scripted and there is not a clear definition of what a moral decision is, the moral decision is more easily examined and understood when these behaviors are practiced. As an approach to learning and leading, the potential is great with its use to improve our understanding of decision-making within context rather than as a prescriptive outcome (Noddings, 2002). This model is designed to help all educators better understand the foundation of and behaviors within care theory with the aim of recognizing the complexities of moral decision-making.

Zembylas, M. (2017). Practicing an ethic of discomfort as an ethic of care in higher education teaching. Critical Studies in Teaching & Learning, 5(1), 1-17.

Care Theory by Joy Egbert and Mary Roe is licensed under a Creative Commons Attribution-NonCommercial 4.0 International License, except where otherwise noted.