“When I was about 30 I had my first panic attack. I was driving home, my three little girls were in their car seats in the back, and all of a sudden I couldn’t breathe, I broke out into a sweat, and my heart began racing and literally beating against my ribs! I thought I was going to die. I pulled off the road and put my head on the wheel. I remember songs playing on the CD for about 15 minutes and my kids’ voices singing along. I was sure I’d never see them again. And then, it passed. I slowly got back on the road and drove home. I had no idea what it was”. (Ceejay, 2006)

Ceejay is experiencing panic disorder, a psychological disorder characterized by sudden attacks of anxiety and terror that have led to significant behavioral changes in the person’s life. Symptoms of a panic attack include shortness of breath, heart palpitations, trembling, dizziness, choking sensations, nausea, and an intense feeling of dread or impending doom. Panic attacks can often be mistaken for heart attacks or other serious physical illnesses, and they may lead the person experiencing them to go to a hospital emergency room. Panic attacks may last as little as one or as much as 20 minutes, but they often peak and subside within about 10 minutes.

People with panic disorder experience recurrent (more than one) and unexpected panic attacks, along with at least one month of persistent concern about additional panic attacks, worry over the consequences of the attacks, or self-defeating changes in behavior related to the attacks (e.g., avoidance of exercise or unfamiliar situations) (APA, 2013). As is the case with other anxiety disorders, the panic attacks cannot result from the physiological effects of drugs and other substances, a medical condition, or another mental disorder.

A panic attack is defined as a period of extreme fear or discomfort that develops abruptly and reaches a peak within 10 minutes. Its symptoms include accelerated heart rate, sweating, trembling, choking sensations, hot flashes or chills, dizziness or lightheadedness, fears of losing control or going crazy, and fears of dying (APA, 2013). Sometimes panic attacks are expected, occurring in response to specific environmental triggers (such as being in a tunnel); other times, these episodes are unexpected and emerge randomly (such as when relaxing). According to the DSM-5, the person must experience unexpected panic attacks to qualify for a diagnosis of panic disorder.

However, panic attacks themselves are not mental disorders. Indeed, around 23% of Americans experience isolated panic attacks in their lives without meeting the criteria for panic disorder (Kessler et al., 2006), indicating that panic attacks are fairly common. Panic disorder is, of course, much less common, afflicting 4.7% of Americans during their lifetime (Kessler et al., 2005). Many people with panic disorder develop agoraphobia, which is marked by fear and avoidance of situations in which escape might be difficult or help might not be available if one were to develop symptoms of a panic attack. People with panic disorder often experience a comorbid disorder, such as other anxiety disorders or major depressive disorder (APA, 2013).

Agoraphobia, which literally means “fear of the marketplace,” is characterized by intense fear, anxiety, and avoidance of situations in which it might be difficult to escape or receive help if one experiences symptoms of a panic attack (a state of extreme anxiety that we will discuss shortly). These situations include public transportation, open spaces (parking lots), enclosed spaces (stores), crowds, or being outside the home alone (APA, 2013). About 1.4% of Americans experience agoraphobia during their lifetime (Kessler et al., 2005). 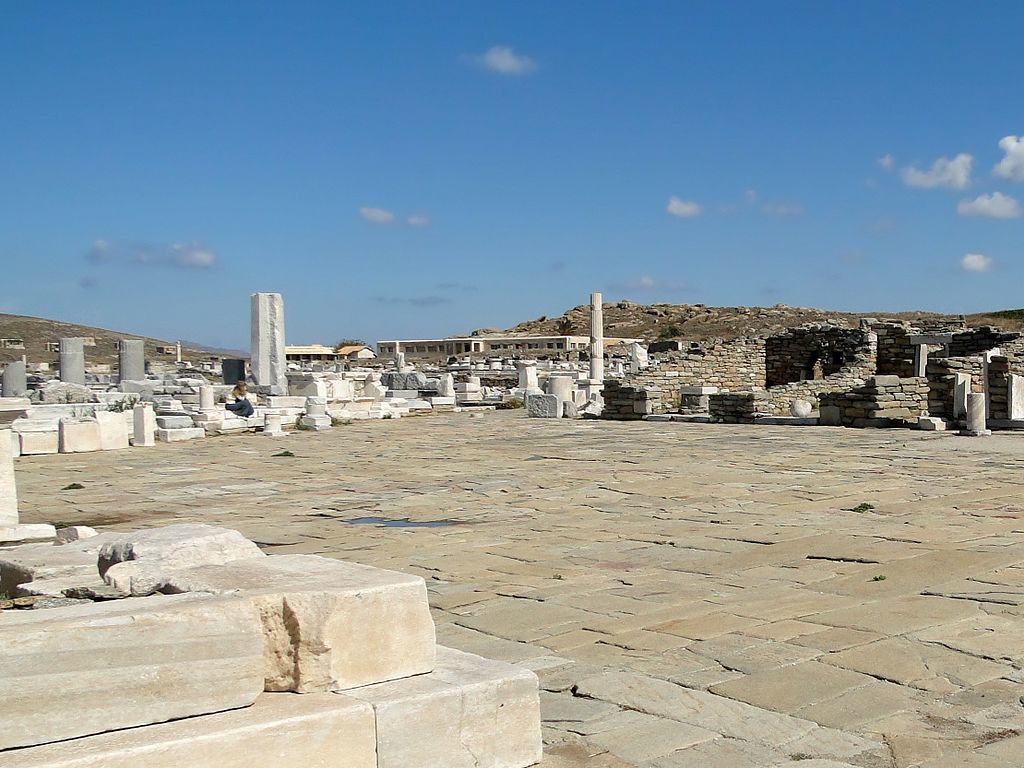 A picture of an ancient agora in Delos, Greece. Agoraphobia was named after such places.

Acquisition of Phobia through Learning

Many theories suggest that phobias develop through learning. Rachman (1977) proposed that phobias can be acquired through three major learning pathways. The first pathway is through classical conditioning. As you may recall, classical conditioning is a form of learning in which a previously neutral stimulus is paired with an unconditioned stimulus (UCS) that reflexively elicits an unconditioned response (UCR),eliciting the same response through its association with the unconditioned stimulus. The response is called a conditioned response (CR). For example, a child who has been bitten by a dog may come to fear dogs because of her past association with pain. In this case, the dog bite is the UCS and the fear it elicits is the UCR. Because a dog was associated with the bite, any dog may come to serve as a conditioned stimulus, thereby eliciting fear; the fear the child experiences around dogs, then, becomes a CR.

The second pathway of phobia acquisition is through vicarious learning, such as modeling. For example, a child who observes his cousin react fearfully to spiders may later express the same fears, even though spiders have never presented any danger to him. This phenomenon has been observed in both humans and nonhuman primates (Olsson & Phelps, 2007). A study of laboratory-reared monkeys readily acquired a fear of snakes after observing wild-reared monkeys react fearfully to snakes (Mineka & Cook, 1993).The third pathway is through verbal transmission or information. For example, a child whose parents, siblings, friends, and classmates constantly tell her how disgusting and dangerous snakes are may come to acquire a fear of snakes.

Panic Disorder: A Confluence of Genetics, Learning and Cognitions

Conditioning theories of panic disorder propose that panic attacks are classical conditioning responses to subtle bodily sensations resembling those normally occurring when one is anxious or frightened (Bouton, Mineka, & Barlow, 2001). For example, consider a child who has asthma. An acute asthma attack produces sensations, such as shortness of breath, coughing, and chest tightness, that typically elicit fear and anxiety. Later, when the child experiences subtle symptoms that resemble the frightening symptoms of earlier asthma attacks (such as shortness of breath after climbing stairs), he may become anxious, fearful, and then experience a panic attack. In this situation, the subtle symptoms would represent a conditioned stimulus, and the panic attack would be a conditioned response. The finding that panic disorder is nearly three times as frequent among people with asthma as it is among people without asthma (Weiser, 2007) supports the possibility that panic disorder has the potential to develop through classical conditioning.

Cognitive factors may play an integral part in panic disorder. Generally, cognitive theories (Clark, 1996) argue that those with panic disorder are prone to interpret ordinary bodily sensations catastrophically, and these fearful interpretations set the stage for panic attacks. For example, a person might detect bodily changes that are routinely triggered by innocuous events such getting up from a seated position (dizziness) , exercising (increased heart rate, shortness of breath), or drinking a large cup of coffee(increased heart rate, trembling). The individual interprets these subtle bodily changes catastrophically (“Maybe I’m having a heart attack!”). Such interpretations create fear and anxiety, which trigger additional physical symptoms; subsequently, the person experiences a panic attack. Support of this contention rests with findings that people with more severe catastrophic thoughts about sensations have more frequent and severe panic attacks, and among those with panic disorder, reducing catastrophic cognitions about their sensations is as effective as medication in reducing panic attacks (Good & Hinton, 2009).

Anxiety disorders like panic disorder and specific phobias are often treated with cognitive-behavioral treatment approaches. Cognitive behavioral therapy for panic disorder (with agoraphobia) is sometimes referred to as Panic Control Therapy (PCT). Among the many treatment modules for PCT, one of the more crucial phases of the treatment is an exposure component. When used in PCT, the main purpose of exposure is to diminish misappraisals of internal sensations (i.e. interpreting elevated heart rate or shortness of breath as a sign of imminent death) and to extinguish panic responses obtained through classical conditioning. Through the principle of habituation, exposure works to help people with panic disorder/agoraphobia overcome conditioned panic responses to both internal sensations and external stimuli in one’s environment.

Introduction to Psychology text by [redacted author(s)] is licensed under CC BY-NC-SA. http://open.umn.edu/opentextbooks/BookDetail.aspx?bookId=48

Introduction to Psychology: The Full Noba Collection by Robert Biswas-Diener and Ed Diener is licensed under CC BY-NC-SA. http://open.umn.edu/opentextbooks/BookDetail.aspx?bookId=228

“Agora of the Competaliasts” by Bernard Gagnon is licensed under CC BY SA 3.0

a. Vicarious learning only applies to non-human species.

b. Vicarious learning can only occur through direct interaction with the source of the fear.

c. Verbal transmission does not involve modeling mechanisms in the acquisition of the fear.

d. Verbal transmission is effective only with members in one’s immediate social group.

2. What inferences may be made of Johnathan for example, who is someone suffering from (typical) panic disorder?

a. Johnathan’s parents both had panic disorder.

1. Information is continually exchanged through different media in our everyday lives. How might the delivery of startling information affect people’s perceptions about the external world? Could this affect people’s acquisition of phobias or other anxiety-related disorders?

1.  When symptoms resembling a panic attack are preceded by certain interpretations of internal bodily symptoms and experience of symptoms themselves, a panic attack may trigger as a classically conditioned response in circumstances where the original, unconditioned stimulus was absent.  Many theories suggest that panic disorder results from genetics, conditioning and cognitions (thoughts). Whereas there is the potential for panic disorder to develop from only classical conditioning experiences, there is also support for the role of biological vulnerabilities and environmental influences in the development of panic disorder.

panic disorder: a psychological disorder characterized by sudden attacks of anxiety and terror that have led to significant impairment, distress and dysfunction to a person’s life.

panic attack: a period of extreme fear or discomfort that develops abruptly and reaches a peak within ~ 10 minutes.

agoraphobia: a psychological disorder characterized by intense fear, anxiety and avoidance of situations from which escape may be difficult (in the event of a panic attack)

locus coeruleus: a region of the brain which is a major source of norepinephrine (adrenaline), which is a trigger for the body’s fight or flight response.

exposure: a part of cognitive behavioral treatment involving the diminishing of misappraisals of internal sensations and to extinguish panic responses obtained through classical conditioning